It as late August 2011 and we decided to walk along a part of The Great Dividing Trail from Daylesford to Kendall's house in Balckwood.

We had been talking to some locals about a small track that doesn't appear on any maps but has some significant history in the region.
Cabbs track runs off Camp Rd, just south of the Balt Camp ruins and reports that there is an old disused picnic area on the site of the old Cabb family homestead. We were keen to find it. 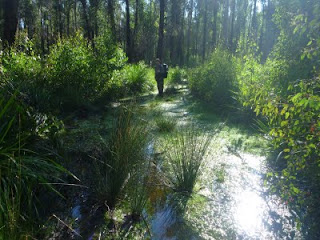 G.D.T stretches through towns like Ballarat, Bendigo and down to Bacchus Marsh. The section we were going to cover is a bit over 30km.

Brent couldnt make this trek so it was just Kev and I.


We were dropped of on the Specimen Hill Rd about a km down from Jubilee Lake at the Cockatoo Creek Tk. The journey began and 8.30 am. We headed west to try and hook up with the G.D.T. 8.40am we were lost. The tracks were really overgrown and hard to find. We wernt sure if we were on track on not so we just head south knowing we would find our location sooner or later. After stumbling across a camper and some lost 4wdrivers we eventually hit the Post Office Tk just after 10am. The track was well signed and we found our first G.D.T marker that pointed us in the right direction. 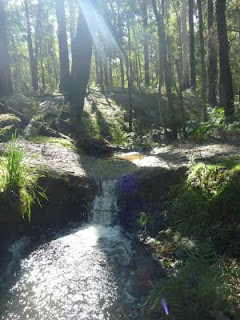 The first thing that was evident was that we were going to get wet feet. The wet winter and the heavily driven tracks were really boggy with ankle deep water and mud in some sections that were impossible to walk around. Everyting was lush green and beautiful.


Once we got on track it was easy going apart from the muddy bog holes. Every intersection was posted with an arrow telling us where to go.

At 11am we hit the Bullarto South Rd, an hour later we were back on Specimen and the Toe Rag Tk. We walked along Toe Rag, across the river and stopped for lunch at 12.15 at the junction where the G.D.T leaves Toe Rag. The spot was 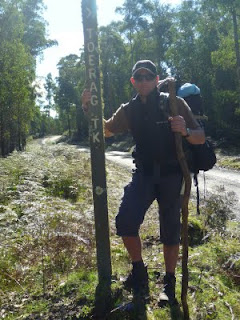 great, fast flowing river with plenty of camping if needed.

At 12.45 we left this great spot continuing along the G.D.T and an hour later reached Cairn Rd. We were still having to navigate through deep muddy 4wd holes. We now head east along the G.D.T, crossing Rat Hole Tk, then probably the biggest climb of the trip up to Camp road.
We were expecting Balt Camp Ruins to be to the south of us, then we were going to start looking for Cabbs track, but to our surprise we had climbed up Cabbs Tk which was not on the map and come out just below Balt Camp. Cabbs Track was sign posted on Camp road and we were wrapped to have found it. We walked about 200mt back down Cabbs to a large clearing and the obvious sight of the old Cabbs family homestead. There was a small camp fire there that had recently been used and we had both wished we knew a little more about this area. 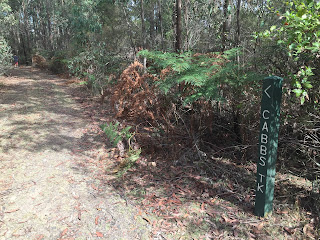 It was 2.45 so we rested in the Cabbs picnic area and had a bite
to eat. We were high up, over 800mt but no real view anywhere as the bush was thick.

At 3.15 we head north along Camp Rd until we hit Olsen Tk, another rugged 4wd track, then 3.45 we were at Lerderderg Rd for an easy 30min walk down to Nolan Creek picnic area to set up camp for the night.

Steve and Paddles from the 1st Lerdy trek aswell as Kendall met us at Nolan Creek and we decided to move camp up hill about 1km on Nolan Creek Rd at a bush camp marked on our map, nice spot, and away from some idiot motor bike riders. 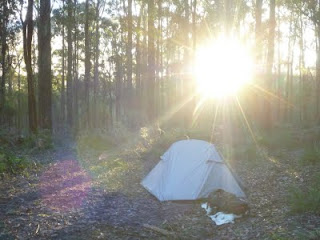 It was a very cold night, probably the coldest I've experienced while hiking but the morning was beautiful, crisp, clear and the sun through the trees was worth the broken sleep.

Another great day ahead with clear sky's we left at 9.15 back towards Nolan Creek Picnic area. We crossed the river and passed the yobbos and head up the Nolan Ridge Tk in a south direction hoping to see some nice views as indicated on the map. Nup, no views, but the climb up the track was tough but good. Even at the height of 800mt the bush was still very green and huge tree ferns in parts as if we were down by the river.

We got onto the Blackwood Ridge Rd and made McLaughlins Lookout by 11am. The bush was nice but not sure what we were meant to look out for, still nothing to see but forest.

After a short break we headed for the Easter Monday Mine and after having to back track a little when we took the wrong turn, we arrived at 12.15. We dumped our packs at the info sign explaining about the mine and started looking f 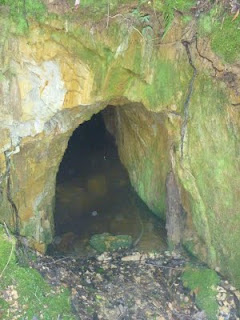 or it. 45 min later and we found the mine entrance couple hundred meters down the hill, nowhere near the sign and track that was on the map. Very misleading but worth the search. Cool looking mine but we couldn't go in as it was full of water, but in a great spot.

When you see the mine sign post, read it then keep walking down the main track for a few hundred meters, another little track appears to the south, the mine is at the end of that.

We left the E.M.M at 1.15 and and arrived at Garden of St Erth half hour later then it was back on the G.D.T. This last section was definitely the nicest. The Imperial Mine was cool to explore and it was great to be on a normal walking track and something that wasnt ripped up by 4WDs. Nice flowing river with lush green bush was a great way to finish off the walk as we arrived at Kendalls house in Blackwood at 2.45pm. 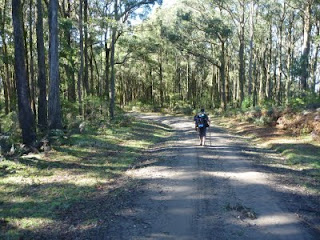